London Is Ever So Lovely – Can’t Get Enough!

My favorite place in the world is London – it is one of the places I can go to again and again, and never be bored. I just love London! Me and my family flew to London on July 22nd, 2014 and arrived in London on July 23rd at Heathrow Airport at around 3:15 pm.  We were to have 5 days in London…..I wish I could have stayed longer!  In this post, I will just show you what we saw on Day One in London.  Since we were going to stay in Trafalgar Square, that is the picture I will show you first.

I could have got a taxi into London, but no….that would not make sense – the traffic is crazy there, and it would have been ever so expensive. I could have got the Express Train from Heathrow, but that was £42 for all four of us (Chandi – my 5 year old would have been free). I thought, no…I have spent so much money already on this trip that I need to economize a little where I can – so what did I do? I was daring and did just as I have done many times before – I took the underground from Heathrow into Central London.  Besides, you can’t beat taking the underground for speed – yes, the Express would have been faster – 15 minutes instead of 40 minutes or so, but after an 11 hour direct flight from San Diego, I think 40 minutes was not too bad.

The Tube aka London Underground

Why do I say that I am daring? Well, you have to be daring to take the underground when you are traveling with three kids, 3 big suitcases, one smaller rolling carry on bag and about three or four more bags. After all, you get just a few seconds at times when those tube doors open and it is quite a process to get all the suitcases, myself and 3 kids out of the door on time!  We changed lines at Piccadilly Circus where we got the Bakerloo Line (the brown line) and got off at Charing Cross – just one stop away.  After getting out at Piccadilly Circus, and lugging our suitcases up a big flight of stairs (there are escalators, but sometimes you are faced with plain old stairs too and no elevators), I was tempted to just exit and walk about 12 minutes to Trafalgar Square, but decided to plough on and change lines – which meant for the sake of one stop – having to go through all that again…getting out of the tube doors on time, and going up more stairs.  Understandably, it was daunting, and we were already quite exhausted. 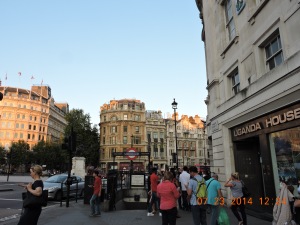 So you might want to know how much it was on the tube?  The tube is another name for underground – but you already probably know that.  I had to get two adult one-way tickets since my daughter is 17 years old, and a child’s ticket for my 12 year old son who just turned 13 during this trip, and that cost a total of £14.20 – my 5 year old was free.

We stayed at the Hilton Trafalgar right on Trafalgar Square, you might be able to see it on this picture.

I think I’ll pass on telling you how much it was for my hotel for 5 nights and for our flights to London from San Diego….I’ll be paying it off for quite some time!  Anyhow, we checked in and were really happy with our hotel.  Additionally, it was heavenly to notice that there was milk for tea in the room, instead of cream or powdered cream….how I hate having to put cream in tea – I always call down to the reception to ask for milk.  Similarly, I must have cream for my coffee, and not milk – let’s just say I’m spoilt when it comes to my hot beverages!

Hilton Trafalgar in the room self service 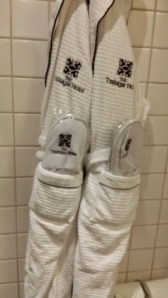 I had bought a new Nikon P600 and initially put a setting on it to print the date and time, however, I don’t think I changed the time to local time in England – so it probably reflects an incorrect time of at least 8 hours behind (USA time is 8 hours behind that of England). I subsequently decided to take off the setting a day or so later, as I was trying to decide whether it was kind of cheesy having the date on my prints.  Some of the pictures were taken with my Canon G10 and some with my Note 3.  I think you have to have a number of devices with you when you travel, as your batteries will get exhausted and what better than to reach into your bag for another fully charged camera!

Well, that is enough talking right now, and let’s get to some pictures. 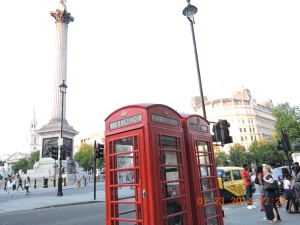 Trafalgar Square and the Blue Hen 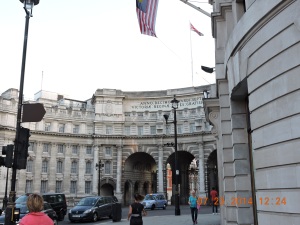 We walked over to Leicester Square later that evening, it is only a 5 minute walk. 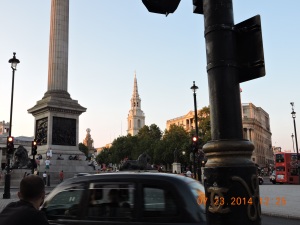 St. Martin In The Fields – an English Anglican Church (center of the picture)

I craved fish and chips, but we ended up going to Pizza Hut in Leicester Square on our first night, that’s what the kids wanted. 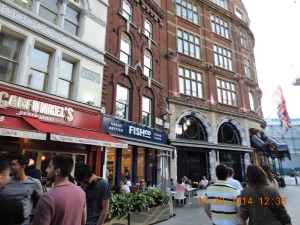 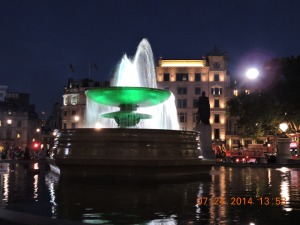 Well, that was Day One in London.  I already am having the time of my life, and want the next four days to go ever so slowly.  Next time, I will let you know about Day Two, and/or the remainder of my visit in London.