Lovely La Jolla, what more is there to say.  This place which is just a 12 minute drive for me going south, or a 20 minute drive from downtown San Diego is spectacular.  The scenery is amazing, and the wildlife is abundant. 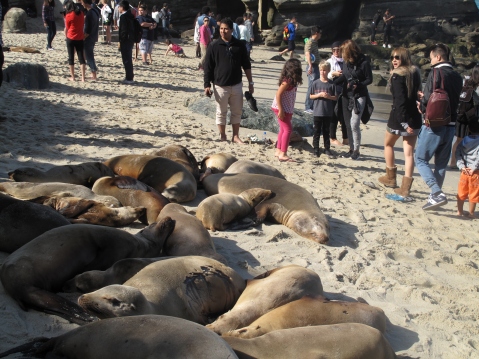 Most of the time, the seals like to laze on the beach, and don’t move much at all, but all of a sudden, a few of them got up to take a dip in the ocean! 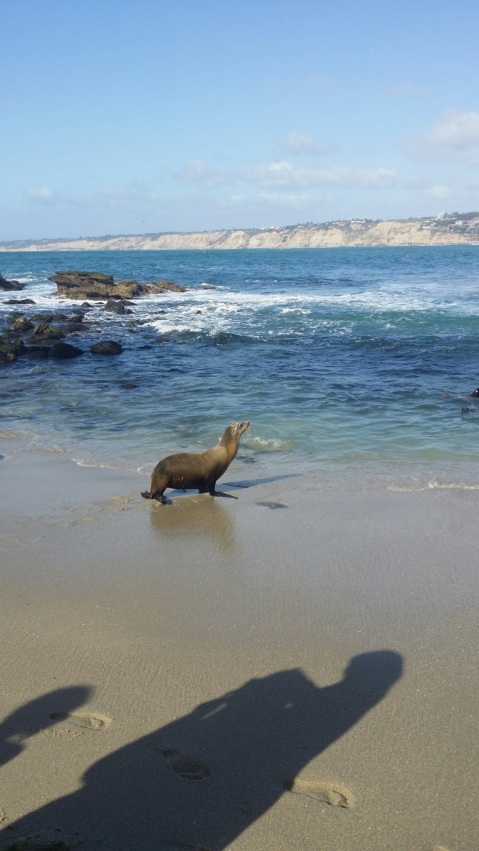 Look at this one! Doesn’t it look like a cross between a sea lion, and a tortoise? 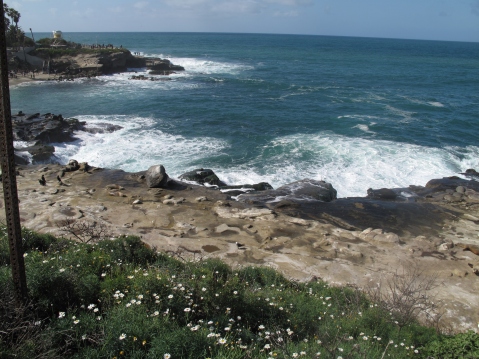 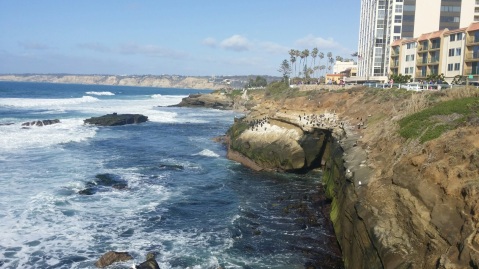 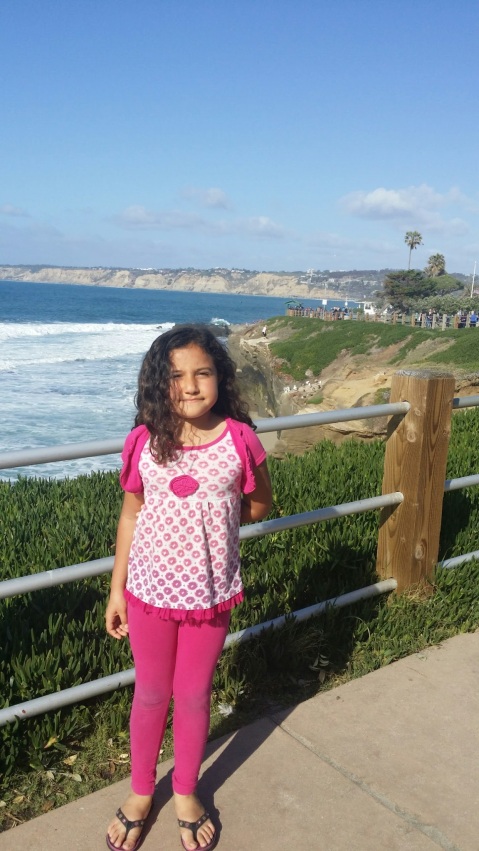 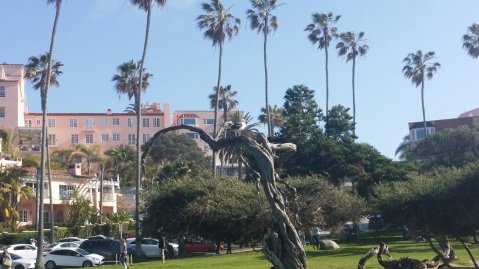 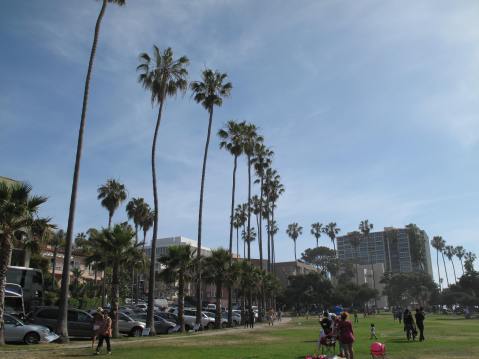 We walked away from the ocean onto Prospect Street, and Chandra got to play with a massive globe that was a water-fountain feature.  Oh, she rolled and rolled the globe around.  She was enchanted! 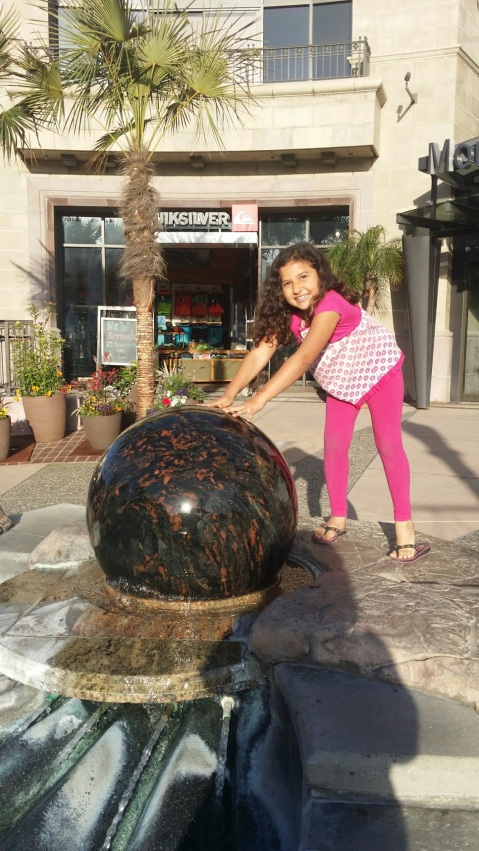 Afterwards, we went for a treat to the Living Room, a really wonderful coffee house, that has wonderful pastries, and sandwiches.  I got Chandra two macaroons, which she devoured before I got to take photos of them, and I also did the same with my pistachio baklava.  Chandra then eyed my coconut mocha, and oh my gosh, it was delicious – it was made with low fat milk, and extra hot.  I left a tiny bit of it for Chandi to try, as she really should not be drinking coffee at her tender age of 7!  She loved it, well….it was delicious! 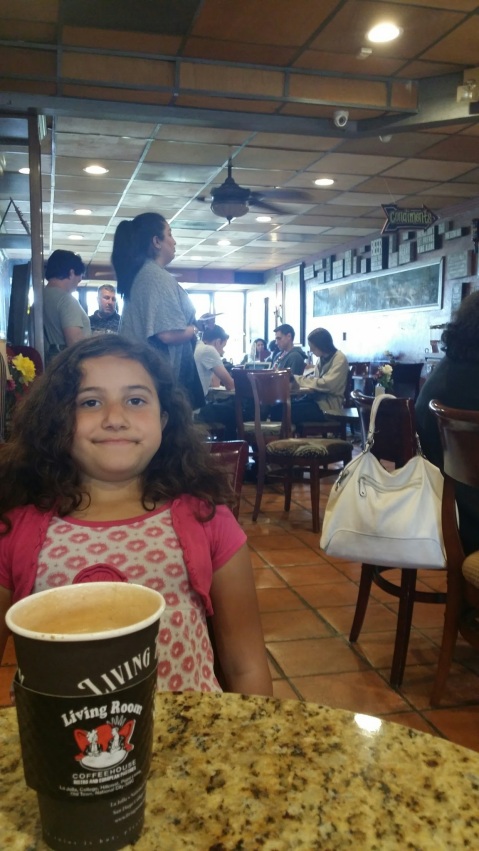 Then she got some gelato from a place called Gelateria, across from the Living Room, and again, I didn’t take pictures – but this was Chandi’s treat as mine was the coconut mocha.  Then, it was time for a few more pictures. 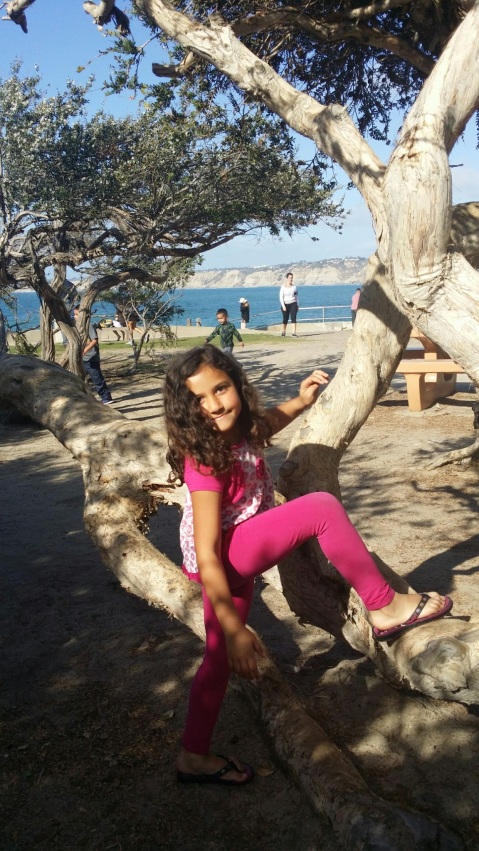 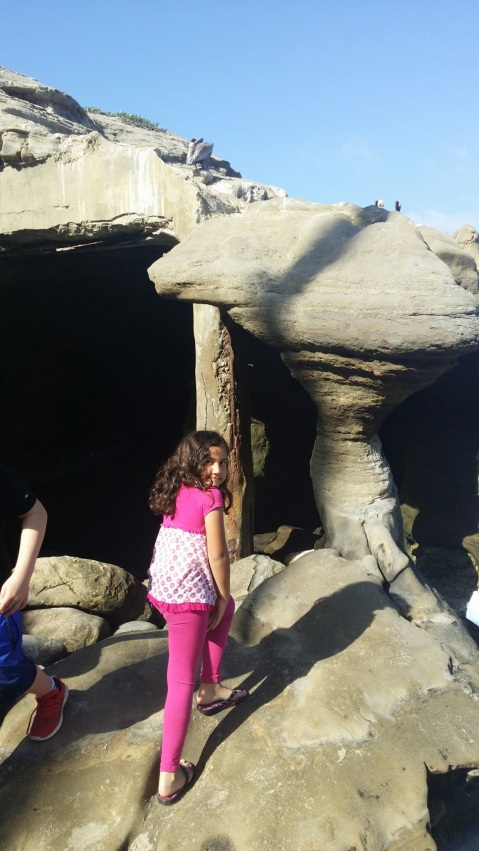 This last picture was from a previous visit to La Jolla

I hope you liked my pictures of La Jolla.  It really is a nice place to visit.  I really enjoy it there, and I think I would like to say it is one of my favorites in San Diego. 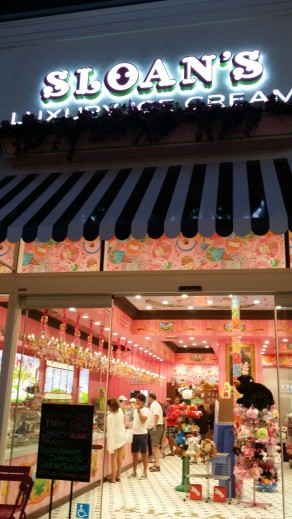 Did you know there’s a place with a magical bathroom?  You may have to come all the way to San Diego to visit it though!  Just kidding!  I think there’s more of these – at least there are in Florida.

The place is called Sloan’s Luxury Ice Cream, and the ice cream is delicious!  I’ve switched my tastes lately to frozen yogurt, and resist ice-cream, but who can resist the decor, it beckons you, tantalizes your every bit of sense, and plunges you into temptation – the temptation to indulge in ice-cream or fudge.  Of course, there is candy, and I believe all kinds of toffee apples covered with scrumptious coatings of the most exquisite imaginings, such as white chocolate, caramel, and…..well you get it! Then there are toys that entice the kids.

But, then…….there is the magic bathroom.  Just be careful that you lock the door, or else everyone will be able to see you while you are in there.  See my video below.  I actually made this video several months ago in August, before my oldest went off to college in September, but didn’t get to upload it until yesterday.  When my kids saw there was a bathroom which was visible from a part of the store where all the stuffed animals are, they were curious because you could see into the bathroom, so off they went to explore.  I could not get my son to be part of the video, but he enjoys Sloan’s just as much as all of us.

We went just again this Friday to celebrate my youngest daughter’s birthday.  Did I tell you it’s a great place for a celebration? 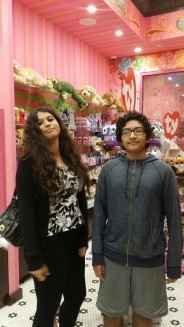 I felt the need to explore today, and have just a bit of “me” time.  The kids were at school, so instead of being cooped up with the computer, I figured some fresh air and reacquaintance with San Diego was on the list.  I headed for La Jolla which is only about a fifteen minutes drive north from downtown San Diego.

By the way, La Jolla is not pronounced with a “J” like in jolly, rather it is pronounced “La Hoya”.  Want to hear the pronunciation in Spanish?  http://translate.google.com/#en/es/jolla  Just click on the speaker button when the Google Translate page opens.  Want to hear the pronunciation in Finnish?  http://translate.google.com/#en/fi/jolla – I was inspired to add these two links, courtesy of Matti from Finland (see comment below).  Thanks, Matti.

This is what I saw, and photographed with my I-Phone (not the camera of choice), but this had been a spontaneous trip, and was not planned, so I apologize if the pictures are fuzzy. 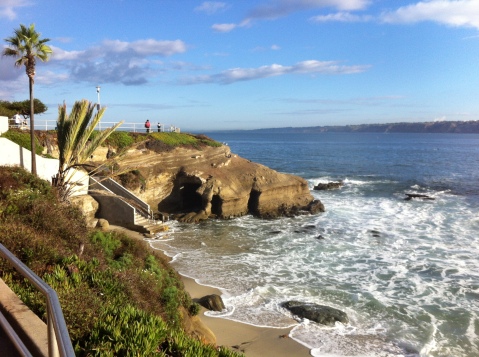 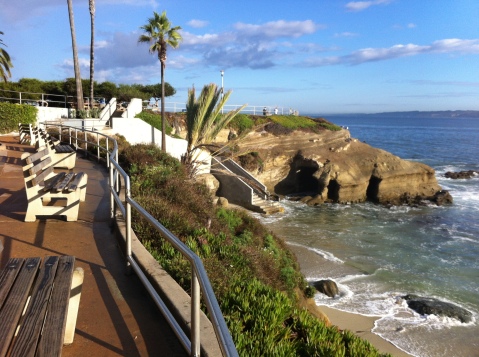 Even the sea lions love La Jolla.  We have plenty of them, as well as seals, but I think these are sea lions: 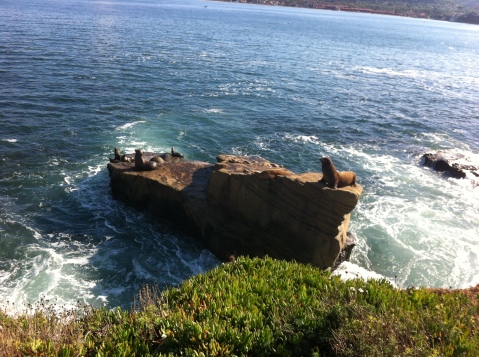 The sky seems so beautiful and blue, but all these pictures were taken on the same day, and I never touch up my pictures. 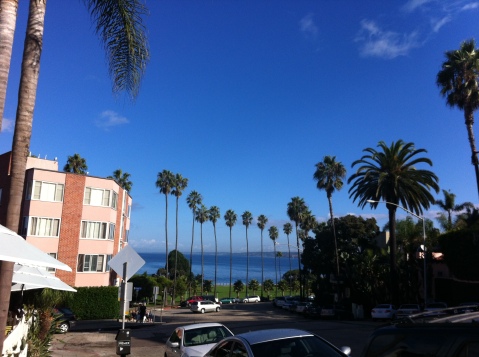 Want to see what yesterday morning was like?  It wasn’t that nice weather-wise, it was drizzling slightly, and the skies were grey, but something spectacular appeared in the sky – a full rainbow!  I have never seen such a big rainbow, I was overjoyed.  Again, I only had my I-Phone, and could not capture the entire rainbow from left to right – it was way too big!  Actually, this picture did not come out nice, it was nicer seeing the rainbow in person, and was a completely different experience.

This picture taken in La Jolla today seems to have a faint shadow of a rainbow, but I don’t think there was one in the sky at the time I was taking these pictures, although I did see another rainbow again earlier today, but not like yesterday’s. 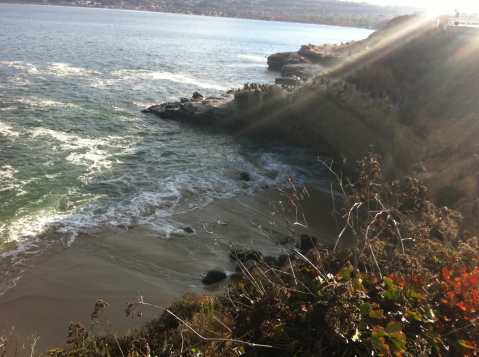 The weather has turned a little cooler now in San Diego, but it’s still beautiful during the day.  We finally got our morning and evening breeze back, but as always – when we have it back, we wish we had the heat back.  Still, San Diego is Paradise on earth, and after seeing it again today – I think there’s no better place.

This is an addition to the post:  Look at the picture I just added (below).  This is La Jolla Cove, and was taken in approximately October of 1996 (before I moved to San Diego – while on holiday).  I just found this picture, and compared it against Image 3088 which is picture 7 (above) – just to make sure it was La Jolla, and not one of the many other beaches around the world.  You will see that it is the same place, even if the quality of the pictures is very different – this new addition was taken with an older camera, which was not a digital camera (not sure which camera – probably Olympus), and hence I scanned it onto my computer.  I wonder if you notice any real changes other than image quality and color?  Anyway, enjoy this “new” picture too.

Here are both pictures of La Jolla Cove closer together.